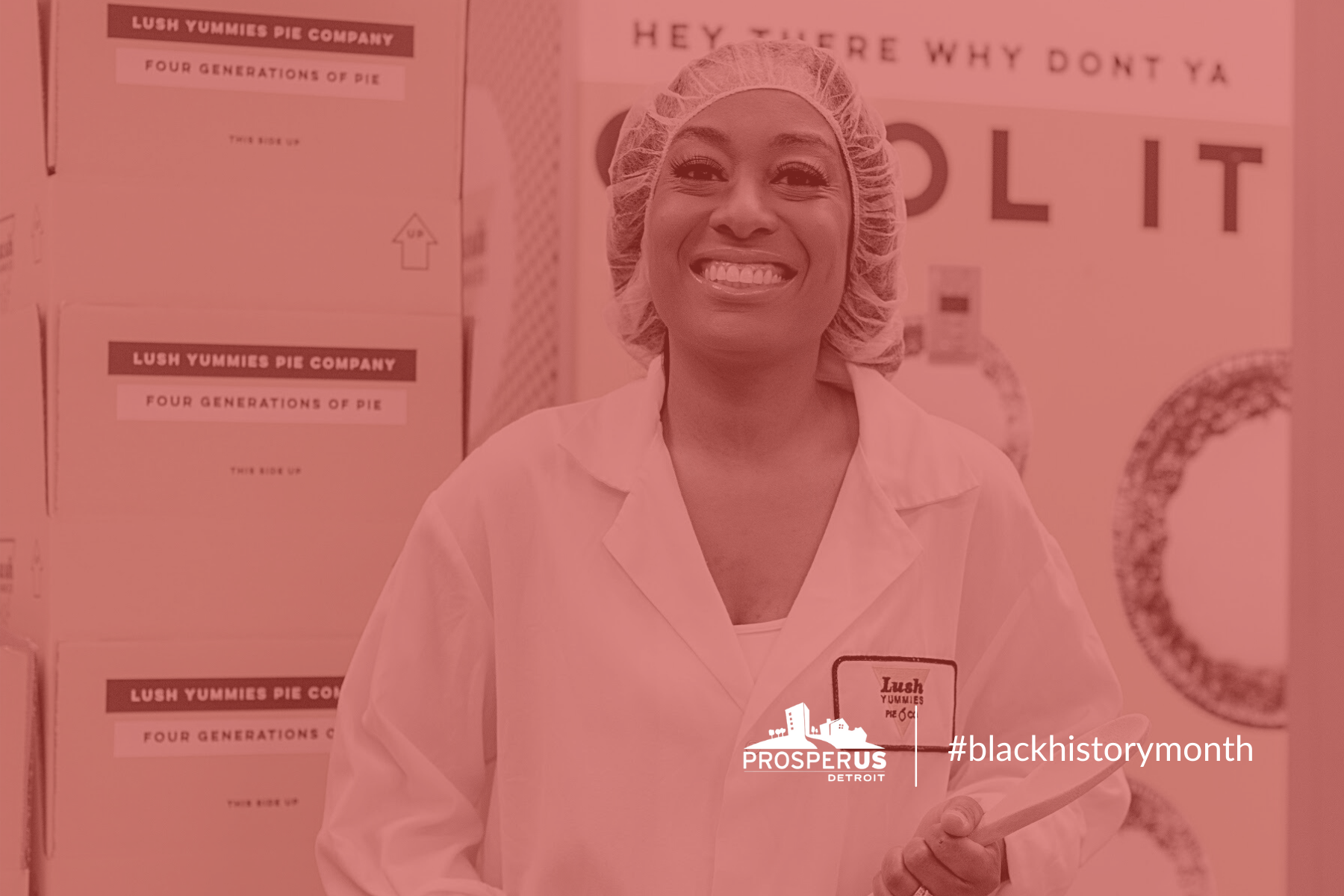 Jennifer Lyle and ProsperUs Detroit go way back. She was part of the first graduation class of our Entrepreneur Training Course and has since inspired many of us. Jennifer’s love for her family’s pie-making heritage and tradition is what inspired her to open Lush Yummies Pie Company, a shop dedicated to sharing her family’s delicious pies. Inspired by what her grandfather taught her, Jennifer makes pies in her own way with a strong emphasis on local and farm-fresh ingredients.

Jennifer first discovered her entrepreneurial spirit when she worked as a high school English teacher and cheerleading coach in Atlanta, Georgia through Teach for America. As a cheerleading coach, she found herself having to pay for her students’ uniforms so often that she began to also give them baking lessons and show them how to make money through baked goods. More than few can now bake an ol’ fashioned American apple pie.

She decided to leave teaching behind to focus on baking full time, so she took to selling her grandfather’s pies at local Detroit events to fund and start her business. She also competed in pitch competitions after becoming fascinated by the pitch competition reality television show Shark Tank. Although she lost four pitch competitions in a row Jennifer made sure every loss came with a learning opportunity and she came back to win over fourteen pitch competitions and grants which allowed her to debut her own production facility in Eastern Market. Lush Yummies Pie Company pies can now be found in national chain grocery stores, local markets, and she ships her pies nationwide through online sales despite recent struggles and adaptations around COVID-19.

The pandemic had adverse effects on Jennifer’s life and business. Lush Yummies Pie Company and their staff suffered the unfortunate loss of the kitchen manager, and after the grocery stores carrying the baked goods slowed down with sales, they adapted their business to online and in-store pickups. Jennifer finds herself delegating at a higher level than in the past now. She used to bake, but the time has now come to work on expanding the Lush Yummies Pie Company brand and helping it grow through outside investments.

As mentioned previously, one of Jennifer’s baking teachers was her granddad. And among many family recipes, one he passed down from his mom was Lemon “Butta,” a sweet tradition that made its way from hot Alabama summers in the 1940s to the ones they shared and baked together in 90s Detroit. She received a formal culinary education at the Le Cordon Bleu Culinary School in Miami, Florida, shortly after completing her teaching career in Georgia, and holds a bachelor’s degree from Howard University in Communications and Graphic Design. Moving forward, she plans to write about a book that shares her pitch journey as well as a cookbook that encapsulates her grandfather’s recipes.

At home, Jennifer does not “do a whole lot of sleeping” as she learns to divide her time appropriately between the business and kids. She has realized this situation has brought her the opportunity to bring structure into her life and become a better mother.

Tag along for a delicious journey with Jennifer Lyle at @lushyummiespieco on social media and check out the fresh website at LushYummiesPie.Co for more details on these tasty pies.